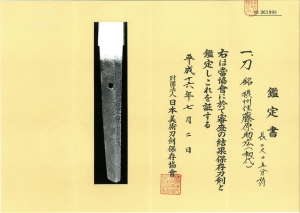 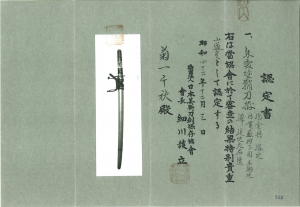 Soboro Sukehiro (そぼろ助広) whose real name was Tsuda Yabei, is a swordsmith from Tsuda in Harima province. His activity was recorded between the Kanei and Keian era (1624-1652) and his extant signed works only date back to the beginning of the Keian era (1648). He is also known to be the founder of the Tsuda school , which will see the emergence of leading smiths  through the shintō period, such as his adopted son Tsuda Echizen no Kami Sukehiro, who was one of the best smiths of his time and the inventor of the famous toran-midare hamon or his pupil Tsuda Ōmi no Kami Sukenao .

Sukehiro began his career in Tsuda, then moved to Ōsaka in Settsu to become the disciple of Kawachi no Kami Kunisuke and where he created his school, thus enriching the prolific shintō tradition of Ōsaka. Sukehiro’s swords are known for their extraordinary sharpness, placing him in the very closed circle of saijo-ō-wazamono smiths, able to make blades with exceptional cutting abilities.

Most of the works of this smith are in Bizen chōji-midare style and are in continuity with those of his master Kunisuke, with also some swords produced in suguha in Yamashiro style.  He died in 1663, shortly after he obtained the title of Echizen no Kami from the Imperial Court.