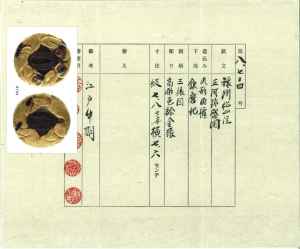 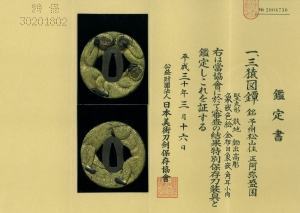 From the Muromachi period, several branches of the Shōami School flourished throughout Japan, one of the oldest known is that of the Ko-Shōami tradition. The growing interest of high-ranking samurai for more manageable swords such as uchigatana has pushed many artists to adapt their work to face a more prestigious demand. It is in this context, that simple, functional tsuba have become increasingly sophisticated, and that several specialized schools in this field have emerged.

After the Battle of Sekigahara, Iyo province was divided up into several fiefs. Those with the most income were the Matsuyama (松山藩, 150.000 koku), the Imabari (今治藩, 35.000 koku) and the Saijō fief (西条藩, 30.000 koku). The former two were ruled by the Hisamatsu (久松) and the latter by the Matsudaira family (松平), both branches of the Tokugawa family. Early Iyo-Shōami artists who had their origins in the Kyō-Shōami school and who worked for the families of the Matsudaira and Hisamatsu were Ietake (家武) and Morimine (森峯). Both are dated to the time slightly before and around the Genroku era (1688-1704). Subsequent Iyo-Shōami artists used either the character “Ie” (家), “Yoshi” (吉), or “Mori” (盛) in their names and are grouped according to these characters. The most famous representative of the Mori group was Morikuni (盛国) of whom we know dated signatures from the eras Kyōhō (1716-1736), Kanpō (1741-1744) and Enpō (1744-1748).