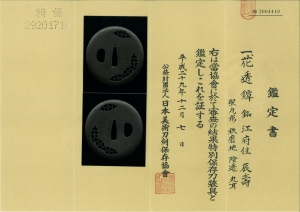 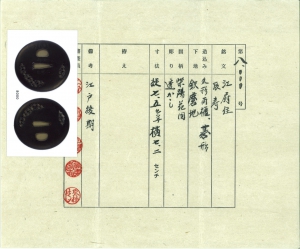 Several similarities and influences between many schools intertwined at the end of the Edo period, so that the belonging of the artist Tatsutoshi was attributed to the Bushu-Itō school in some book’s sources and to the Akao school in others.  In the splendor and luxury of the Tokugawa shogunate, these two schools are known to have had very prosperous branches in Edo (Tokyo). Their favorite field was a work on openwork iron, tempered and polished with various motifs often representing natural elements or landscapes.

It seems that the most commonly accepted idea is that Tatsutoshi, whose real name is Ido Chūshichi, was an artist belonging to the Akao school. His work includes influences related to the Akasaka school tradition. He is also known as the founder of the Itō School of Edo (Tokyo), from many talented artists emerged such as his son Tatsunao, Namitoshi or Tokitoshi.